Celebrating 45 years of establishment in 2021, Vinamilk not only becomes the leading dairy company in Vietnam but asserts its brand position on the international map. The company climbed to top 40  world dairy producers with the highest turnovers (The UK-based Plimsoll Publishing Ltd)

In April 2021, the eco-friendly farm model was officially launched by Vinamilk. This is the place to provide high-quality raw milk to make Vinamilk Green Farm products with a light and pure taste.

With a scale of 8000 dairy cows, on an area of ​​nearly 700ha and comprehensive 4.0 technology investment.

The list was first published by Forbes Asia. In particular, Vinamilk is the only representative of Vietnam in the food industry, stand beside with the big names of the regional economy.

With the investment of importing nearly 200 "cows" of pure A2 milk from New Zealand.

2017
Inauguration of the Organic dairy farm

One of the 2000 largest listed companies in the world and the only fast-moving consumer goods company of Vietnam made this list, with revenue and capitalization of USD 2.1 billion and USD 9.1 billion respectively.

The milestone marks the 40-year journey of formation and development of Vinamilk (1976 - 2016) to realize the "Vietnam Milk Dream" and affirming its position on the world dairy industry map.

Acquiring the remaining 30% stake in Driftwood Dairy Holding, Vinamilk raised its ownership to 100%. Vinamilk officially introduced condensed milk and creamer under Driftwood brandname to US market.

2016
Inauguration of Angkormilk dairy factory which was invested by Vinamilk Inauguration of Angkormilk dairy factory invested by Vinamilk. This is the first and one-of-its-kind dairy plant in Cambodia as of this moment

Vinamilk official launched its brand in Myanmar, Thailand and expanded operations in ASEAN. 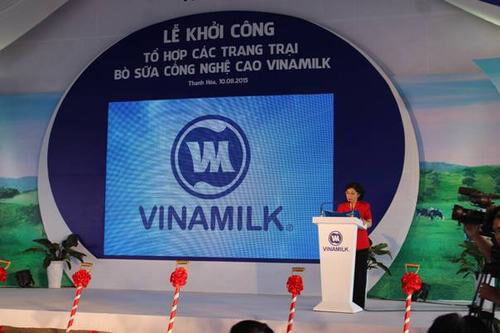 Vinamilk started the construction of Thong Nhat - Thanh Hoa dairy farm (expected to inaugurate in the third quarter of 2017).

Vinamilk raised its stake in Miraka Limited Company of New Zealand from 19.3% to 22.8%.

2014
38 years of innovation and development

Vinamilk has become a familiar brand to Vietnamese and international consumers after 38 years of continuous innovation and development.
Vinamilk has been proving itself of strong spirit of constantly improving, innovating, seeking new directions so that the Company gets stronger and stronger.
Vinamilk built Nhu Thanh dairy farms in Thanh Hoa. Vinamilk started the construction of new dairy farm in Tay Ninh and Ha Tinh (expected to inaugurate in the second quarter of 2017).
Vinamilk constructed dairy farm in Ha Tinh.

Vinamilk is one of the most modern factory in the world which is 100% automated and located in a 20 hectare area in My Phuoc 2 Industrial Zone.

2012
Construction of the fifth dairy farm in Lam Dong Vinamilk was honored to receive the Independence Medal II.

Vinamilk applied new technology, installed advanced equipment and modern machines to all of its factories.
Besides, Vinamilk also established Public Health Nutrition Consultant Centers in the country and launched over 30 new products.

2010
International investment in New Zealand and over 20 other countries

Vinamilk has made its investment in a company in New Zealand manufacturing whole milk powder with a capacity of 32,000 tons/years.
In addition, Vinamilk also invested in the US and opened more factories in several countries. Its export revenue accounts for 15% of total revenue and is increasing.

Thong Nhat, Truong Tho and Sai Gon dairy factories have been awarded the Certificate of "Green Enterprise” by the Ministry of Natural Resources and Environment for achievements in environment protection.

2008
Inauguration of the second dairy farm in Binh Dinh Vinamilk was honored to receive the Independence Medal III.

2001
Inaugurated Can Tho Dairy Factory

Vinamilk inaugurated Can Tho Dairy Factory

2000
Awarded the title “Labour Hero of the Renovation Process”

Vinamilk was awarded the title "Labour Hero of the Renovation Process” by the Government.

Vinamilk was honored to receive the First-Class Labor Medal.

Vinamilk was honored to receive the Second-Class Labor Medal.

Vinamilk was honored to receive the Third-Class Labor Medal.